Home » Radiation and Fields » Solar Can Be A Source To 24×7 Energy Productions In Future! See How?

By the passage of time, scientists are looking forward to bring new sources of energy into the market which do not cause any type of harm and are perfectly working for the betterment of people. One of the biggest achievements today is the use of solar panels in energy production, and it is the way through which people are able to produce and use energy generated by the sun. It is one of the pollution-free energy sources and today, it is also available for domestic use in various regions.

The only drawback that people are observing in this form of energy is that they can only generate electricity in the daytime and stop working at night. It is obvious because they work with the help of sunlight and that is available for limited hours. But, there is research going on for space-based solar power perspectives by which a person will get electricity generated from solar even at night.

What is the idea all about?

How do you think that people will be able to generate electricity from the solar panel at night? Well, this is something which seems to be next to impossible but actually can be the future of electricity generation.

Yes, the future of solar power is from space, and one will surely get energy from it using amazing machinery. The scientists are trying their best to develop and launch a space machine that will store the sunlight in space from the sun and then reflect it back on the earth for better results. In this way, the earth will get constant 24X7 access to sunlight that can generate electricity without any type of doubt and hence can be benefited from renewable electricity generation. 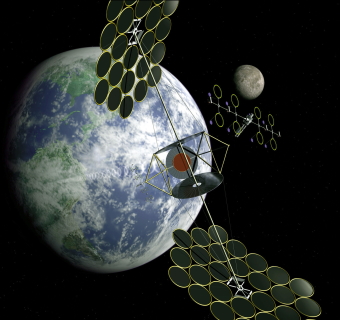 Well, it is something that is highly based on the expectations of the human and one is surely able to judge them in the best possible time. The trends in space-based solar power have brought many hopes to scientists and the main reason behind it is as following.

The satellites in space are the best example of 24×7 solar generation, and by this, a person can get the chance to manage things in the best possible way. Satellite is in 100% contact of the sunlight when they are up in the sky and hence work entirely in the basis of sunlight only. However, they are also a great source of sending signals to the earth, and that is how one can get an idea about how they will get sunlight on earth without any doubt.